Kambiz Djafari: In 2018 we will see cryptocurrencies accepted across all levels of most societies 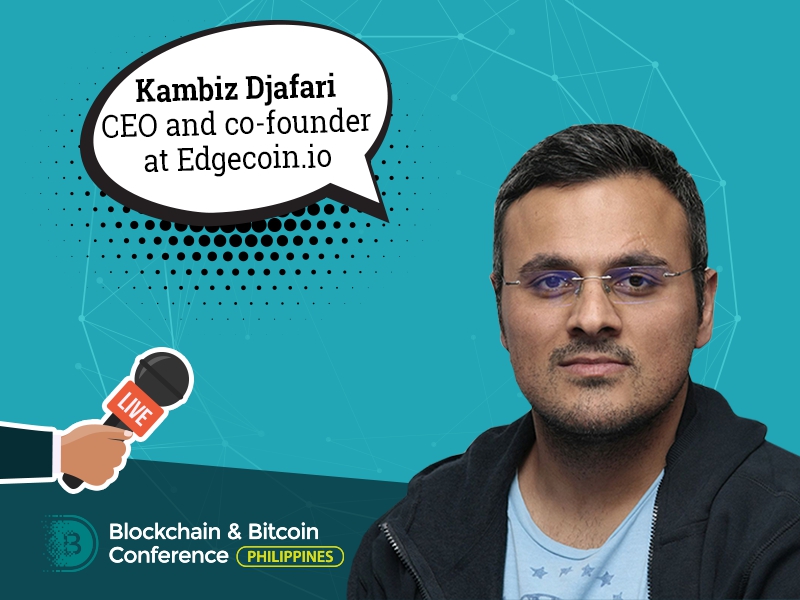 We are waiting for the era of tokenized economy, crypto enthusiast and CEO of Edgecoin.io educational blockchain platform Kambiz Djafari believes. In an interview with the Blockchain & Bitcoin Conference Philippines press service, he talks on the regulation of the country's cryptocurrency and his vision of the future, where the most important processes of society's life will be digitized and blockchain-based.

BCP: Which token sale campaigns impressed you the most in 2017? What is the catch and how promising are these projects?

K.D.: Before naming most impressive token sale campaigns in 2017 please let me explain the nature of different kinds of tokens sales. We had 1. money driven and 2. vision driven successful token sales. For me the most impressive ones were those that could combine both ways mentioned ways above in connection with real life problem-solution use cases. My top ICOs were INS, SONM, Agrello, OpenANX, Civic, Qtum and Aragon. ROI is not considered here.

All those token sales has the combination of real life use case, being well funded, having an applicable vision and a good team set-up in common.

BCP: Each month seems to bring news on unsuccessful or fraudulent ICO projects. Is there a service that conducts a kind of reputation monitoring of startups and their authors?

K.D.: I think that most of the ICOs are aiming too high without considering a solid financial plan before announcing their ICO details. There are ICOs seeking for 50000+ ETH rounds. And if you put this into perspective with their projects (Is there a MVP, cooperation or pilot?), what they have achieved already and is the team set-up sufficient for their goals, you often see a lack of proportionality. That is why they struggle to collect named amounts of money. Beside that the ICO hype is cooling down because investors are not blindly putting money in projects that are lacking a reference to real economic facts and figures.

There are different closed social media groups, experts with fundamental analysis and so on but in my opinion the best way to invest responsibly and sustainably is to do your own due diligence. For me the most crucial factors of a due diligence are: The team structure, advisors, raised seed funds, whitepaper with solid goals, ICO funding goal up to $10-20 million, concrete project and scaling timeline, MVP or any use case and the underlying technology.

BCP: Which mechanisms influence the growth of tokens price for a particular project?

K.D.: There are some influential factors when it comes to price increase of a token.

Announcements about new valuable team members or advisors, signed MOUs, collaborations or projects, product releases and listings on tier one exchanges such as bittrex and binance can trigger the speculative price of a token and boost awareness for the project.

BCP: Which trends in 2018 will determine the development of ICO?

K.D.: I think that financial/tax regulation will play a key role in the further development of ICOs around the world. Also the scalability of the major ICO platform Ethereum will have a big impact on how ICOs will evolve in the future.

BCP: According to some estimates, transactions with cryptocurrency have reached $6 million in the Philippines in 2017. Now the authorities want to equate it with securities. How do you feel about this initiative?

K.D.: In my opinion it would be a hasty and ill-conceived move to equate all cryptocurrencies with securities. As the word cryptocurrency already states most coins are to be seen as currencies. Even though the perception has shifted to an alternative investment class due to the overwhelming value increase of cryptocurrencies since the beginning of 2017. Nevertheless I cannot understand this flat-rate approach for all cryptos.

BCP: Which jurisdictions are now the best for ICO?

K.D.: I think that no matter where and what jurisdiction you will always face specific challenges because of the recency of Blockchain related products and companies. In long term I assume infrastructures, tax and financial models must be developed by companies and authorities in a joint effort.

For short term I would recommend jurisdictions of innovation driven countries such as Estonia, Singapore, Lithuania, Gibraltar, Malta and Cyprus to name a few.

BCP: How will tokenization affect the economy in 2018? What are the main areas tokens will be most popular in?

K.D.: As I have pointed out in several interviews I think that the tokenization of real world assets is inevitable. The digital transformation can be fully conducted only if all involved parties, values and assets are machine consumable (digitalized).

In 2018 we will see cryptocurrencies and exchanges established and accepted across all levels of most societies. Upcoming tokenization trends will be industries that are predestined for being built on the Blockchain. These are all companies for which record-keeping is a crucial or a core component/element. Given this fact I think logistics, grocery, energy and education will be the sectors that will be disrupted by the Blockchain technology in 2018/2019.

BCP: You are CEO and Co-founder at Edgecoin.io. What are the advantages of the platform? What is the target audience?

K.D.: As mentioned above I believe that education is a perfect match for being disrupted by the Blockchain technology. With Edgecoin.io we are building world's first Blockchain as a Service (BaaS) in the education sector. By bringing education on Blockchain we at Edgecoin want to help our target audience - Universities, MOOCs, educators/students and e-learning platforms - to lower their costs, improve, accelerate and secure their approval and certification processes and simplify the storage and archiving of education related data. At the same time these improvements can make all kinds of but mostly higher education borderless and therefore valid everywhere.

BCP: What are your plans for the Blockchain & Bitcoin Conference Philippines? What will you talk about?

K.D.: The #BBConfManila is my first keynote in 2018 and at the same time outside Europe. For me it is exciting to see the development and the state of knowledge in terms of Blockchain technologies in this part of the world and I hope I can help the participants to better understand the token economy and the underlying technologies. And finally I want to share my thoughts about how this technology will disrupt our everyday lives within the next 2-3 years.

BCP: And finally, some predictions: 1) will bitcoin fail; 2) how soon will any student be able to invest pocket money into tokens?

K.D.: I think Bitcoin won’t fail because it is the most established cryptocurrency in the world. In terms of marketing it will always remain the number one at least within the next 10 years even though the technology is rather outdated. It will become some kind of digital commodity and will always be a safe investment when markets are insecure and unsteady. Better technologies such as Ethereum, Cardano, , NEO, IOTA and so on will lead the innovation and also the markets in the future.

I think that it is already happening. Most tokens have a very low entry price especially if you had the chance to go in in an early stage. Projects like Tron, Electroneum and also Edgecoin are good examples for high potential investments with pocket money so to say.