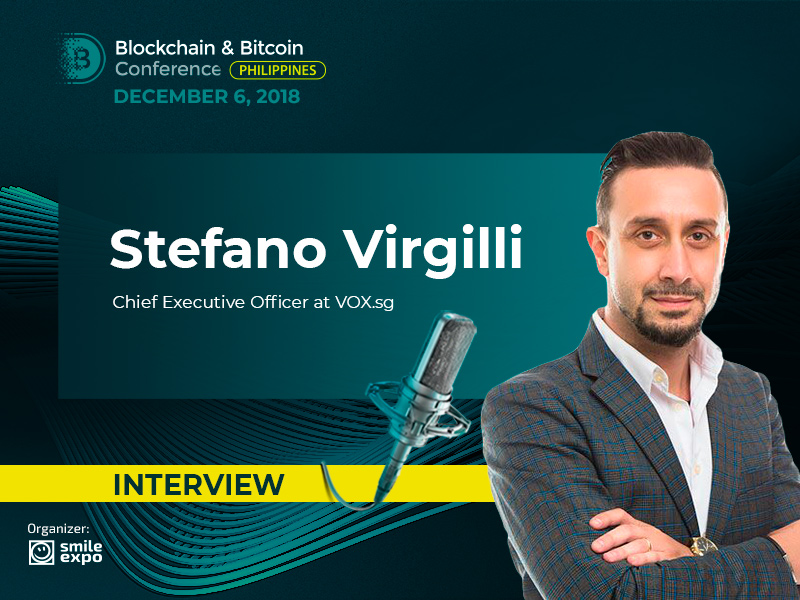 Stefano Virgilli is the ICO advisory expert. He will be a speaker at the Blockchain & Bitcoin Conference Philippines, where he will deliver the presentation “Use case: Blockchain in healthcare, lending industry, wealth management and whisky industry.”

In the interview, the expert discussed blockchain security, mining regulations and new spheres for DLT.

BCP: Can mining regulations be beneficial?

SV: It depends on the intentions of the government whether mining regulations are beneficial or not.

I can guess that with regulations, the government can monitor the miners’ profits and revenues, and then, tax them accordingly.

So, from the government’s perspective, regulations are beneficial as the tax value of mining can be controlled.

BCP: There are websites which utilize users’ computers to mine coins. How serious is this problem? Is there a way for people to recognize it?

SV: There are several ways how to use someone’s processing power. It is possible to inject the malware and control the mining process on someone’s computer remotely.

Then, there are small devices which can be plugged into the air conditioning system. They don’t process a lot of transactions in terms of hash rate. However, they are very cheap to make and buy as the price is just around 20 Euros for one. But they also break easily, even working slowly. So, if you own 24/7 facility for mining, make sure you don’t have these devices plugged in.

SV: It is hard to define scam as scammers are turning to be more clever. Also, turning to the history of mining pools attacks, sometimes even big ones were not technically hacks.

It can be just a log into the system with the someone’ password, so it is hard to distinguish between a hack or a scam.

BCP: Which industries can be improved with DLT except for finances? How successfully is blockchain being integrated into various sectors?

SV: DLT can be successfully used in industries where validation is needed, for instance, insurance. This sphere should definitely be improved more. When people apply for life insurance, the process is based on trust.

Usually, customers can say they don’t have an insurance condition, and the agency believes it and says there is no need to be medically examined. When denied by one insurance, it is possible to make an application for it in another country, as the industry lacks traceability.

As for the financial sector, making applications for a loan can be improved the same way. To apply for a loan, it is necessary to provide information about the salary, employment history and other loans. This process lasts for two to three weeks, but with DLT, the procession of this data can take just literally one second.

BCP: Recent research has shown that around 3.5% of blockchain smart contracts can be attacked. Does it mean that blockchain is not as secure as people think?

SV: As for hacking and scamming, it is important to consider what the scam originally is. Twenty years ago, for instance, the vulnerability was defined according to how many chances to enter the system one had.

Blockchain is very different: external parties have to have all the other blocks’ memories. If they don’t do so, they don’t have a chance to change and do things even if they enter the system.

In other words, if I enter my neighbor’s property pretending to be him, his wife will recognize that I’m not her husband. It doesn’t depend on the way I look, as I can look exactly like him. The thing is that she will be able to make a validation based on her memories, and I don’t have them.

So, I can’t “hack” the system even with the open door, as it is based on memories. DLT has the same principle.

Learn more about DLT from the crypto expert at the conference!